For more about botany in the Buckeye State, visit  ohioplants.org, the companion to Ohio Plants, EEOB 2210.

15,000 years ago, a Glacier from Canada carved its way through central Ohio, creating a unique park in its place. The Glacier even left a large granite deposit as a gift — now camouflaged in natural greenery.  The result of this Glacier’s journey is the ravined and lush Metro Park of Columbus, Blendon Woods. Blendon is known for its deep-cut ravines. The steep hill tops are capped with sturdy sandstone, while the streams expose layers of eroded and broken slate in the depths of the ravines (it is this contrast in erodibility that formed the steep hills and ravines, best observable on the Overlook Trail).

Blendon Woods has a wide variety of trees, shrubs, and wildflowers, but it’s the Beech and Shagbark Hickory trees that are most abundant.   These woods are dynamic, with sunny peaks covered with flora and fauna, to dark hill sides of trees so tall and canopied that the only life on the ground are fungi enjoying the leaf litter. Blendon Woods is a true beauty to behold, and its glacial origins reminds us of the historical eternity of nature. You will come out lighter than when you entered. 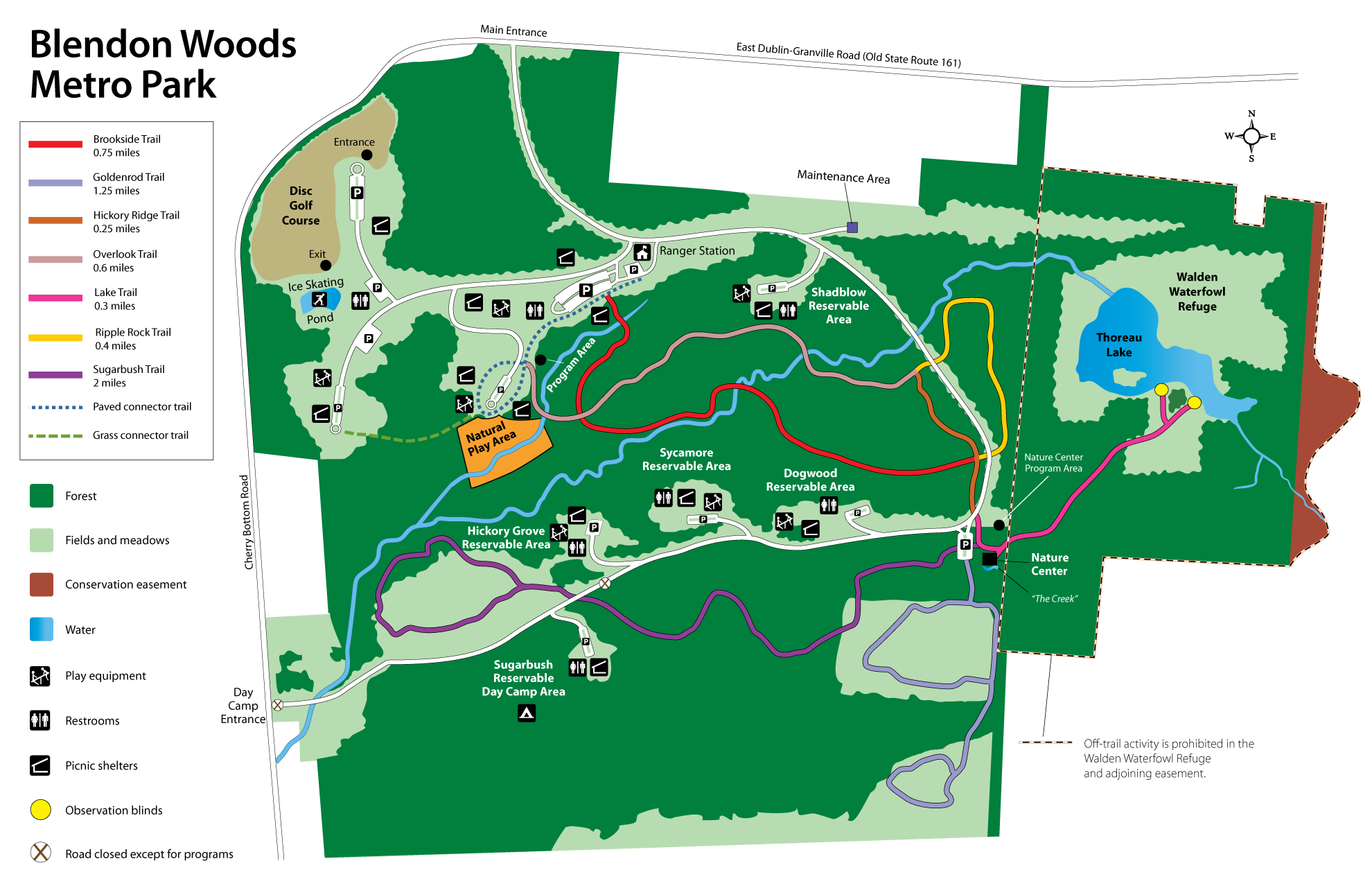 Shagbark is most earning of its namesake, and is most identifiable by its signature shaggy bark, that almost looks like someone took a giant vegetable peeler to it. It has alternating leaf patterns ranging from 5-7, and the leaves are pointed and serrated, which the sun expose in the picture below highlights well (in my humble opinion).

I have to admit, I always get excited when I see Shagbark because I can confidently shout to everyone I know what it is. It is one of my favorite trees, reminding me of going on nature walks with my grandpa (Ta), and he would point out and name the different trees to me. I remember Shagbark the best.

Shagbark grows slowly –only about 12 inches per year — but once fully grown, its trunk grows tall and its branches sit high, as in the photo below.

You’ll notice American Beech Trees easily on any walk: if not for its discernible leaves and bark,then for all the initials and hearts carved into their trunks! Let me tell you, many lovers have walked through Blendon. It is hard to find a Beech without a carving (no worries, the tree can outgrow them — and outlive them🤣 No offense, but they can live for 200 years).

The Beech is identifiable by its bright green leaves that range from 3-6 inches in length and have sharp, in-curved edges. (Do you like my new leaf-description vocabulary? I’ve been reading Newcomb’s). It also has smooth, light gray-tan bark. The Beech also produces sweet edible beechnuts.

Fun Fact: Beeches grow in rich soil. When Ohio settlers tried to find places for farmland, they would search for the Beech tree as a sng of fertile soil. Consequently, the settler tore down all the beeches and then tilled the land.

Remember in the first paragraph when I said every Beech in Blendon seems to be carved? and then I said don’t worry because the tree will outlive the initials and things got    a w k w a r d?  Well, funny story about that. In 1918, a 365 -year-old Beech tree fell down in Tennessee, and like most Beeches, there was an inscription, but this one was a bit more unique than the average “M + C.” Inscribed in the tree was a message from Daniel Boone: “D. Boone Cilled A Bar on This Tree in Year 1760” It is estimated that the Beech was already 200 years old when Daniel Boone inscribed his accomplishment.

Below are the leaves of the Beech tree. In the background, you can spot the smooth gray bark of other Beeches.

Also known as “Lesser-Daisy” Fleabane (as in, the lesser version of its sibling “Daisy Fleabane” which I think is rude), Prairie Fleabane is recognizable by its flat, white flower head made of thin petals and a bright yellow center. There can be between 50-100 of these long, narrow petals on a single flower. The lower leaves are elliptic in shape and toothed. Prairie Fleabane differs from its other Fleabane varieties because its “stem hairs lie closer” to the stem, and its stem leaves are 1-3 inches high (Newcomb, pg. 382). Its seeds are small and brown and have a papus to travel away in the wind (like dandelions).

Prairie Fleabane is a misunderstood plant. Not only is it called “Lesser-Daisy,” but like most things, we humans try to force a use out of it. At one time, Prairie Fleabane was exported to England as a medicine, even though there is no proof of it holding medicinal properties. A common myth is that Fleabane will repel fleas and ticks, but there is no proof of that either; rather, it is believed “fleabane” was inspired by the plant’s seeds being so small.

Sometimes, a flower is jut a flower, to serve its purpose in its ecosystem, and that’s okay. I mean, isn’t looking at it enough?

What a flower! I was drawn to it immediately. Below are photos of the Large-leaf variety of the Waterleaf plant. It is identifiable by its very hairy stem, its maple-like leaves with 7-13 lobes, and those gorgeous, eye-catching, white flowers with a myriad of anthers extending beyond the petals (Newcomb, p. 228). Large-leaf Waterleaf prefers rockier soil, so the slate foundation of Blendon is a perfect place to find this Ohio wildflower.

Fun Fact:  large-leaf Waterleaf is also called “Shawnee Salad and “John’s Cabbage” because its young shoots are very tender. You can find recipes for using Larger-leaf Waterleaf in salads and soups.

Amur Honeysuckle is a shrub with sweet-smelling white flowers that yellow with age. Its leaves are pointed and inverted, and range from 1-3 inches in length.

I was surprised to find out that Amur Honeysuckle is highly invasive, not only in Ohio, but all over the U.S. and other countries. It is named after the Amur river in Russia, where it grows naturally. Amur Honeysuckle is actually Central Ohio’s “#1 Least Wanted Non-Native Plant.” It was originally introduced in 1897, and because it grows quickly and aggressively, it quickly dominates other coverage plants. Amur Honeysuckle also produces sweet, but nutritionless, bright red berries that attract birds, who then spread its seed. The birds are also affected, because even though the berries are high in sugar, they offer little nutrition. As it takes over other fruit-producing plants, the Amur Honeysuckle’s berries are becoming one of the only berry options for birds.

Nonetheless, it is an apparent shrub around Blendon Woods, being a perfect example of the dramatic takeover invasive species can have in its unnatural environment.

Blackhaw is a humble shrub identifiable by its pointed, oblong 1-3 inch leaves. Later in the summer, it will produce clusters of white flowers. In the fall, it will produce dark blue/black berries that will grow on red stems. (Makes you think of “Blue Flower, Red Thorns” from Shrek, right?) The berries are sweet and edible. Like Large-leaf Waterleaf, Blackhaw prefers growing in rockier landscapes, making it an easy find on the floor of Blendon Woods.

Fun Fact: Blackhaw root is still used for medicinal properties today. It is a natural diuretic, aides with diarrhea, and can even help ease the muscle-tension of asthma, but too much of it can cause side-effects like kidney stones. Women have reported to use Blackhaw root teas to prevent miscarriages or quell uterin camping. Blackhaw even has a WebMD page (I suggest consulting an actual doctor first, though).

Watch out! Even though Blendon Woods feels like an escape, you still won’t get away from dreaded Poison Ivy.

Notice the “toxic” in the scientific name. Poison Ivy is a very common plant infamously known for causing allergic reactions in the form of itchy skin rashes.

Luckily, Poison Ivy is easily identifiable. I was always told “Leaves of three? Let them be!” As in the picture below, Poison Ivy leaves grow in bunches of 3. There is also a long middle stem (“Long middle stem? Don’t touch them!”). Larger growths even have hairy vines (“Hairy vine? No friend of mine!”). In the picture I took below, you can see the thick vine of the Poison Ivy embedded into the tree.

My advice is to remember the song. Here it is all together:

“Leaves of three? Let them be!

“Hairy vine? No friend of mine!”

If you do come into contact with Poison Ivy, do not let the contacted area touch any other part of your body, ESPECIALLY your face (the oils from the leaves are still on you)! Wash the area of skin with warm soap and water to remove the oil.

I can’t wait to go back to Blendon Woods! It is a beautiful park with lots to behold.